Japan is famous for its great stationery. Here’s something new and unusual: the Omoshiro Block (“fun block”). According to Spoon and Tamago, right now it’s only available and the Tokyu Hands in Osaka and it’s pretty pricey, but it might make a fun graduation gift for someone.

Start with a full notepad block:

And as you use the notes, you reveal a famous Japanese landmark:

Click on any of the photos to see the end result.

This writing competition is already over, but it’s fascinating. It’s called Seat 14C and here’s the intro video:

The contest was to write the story of what happened, as a person sitting in one of the seats on ANA Flight #008, which departs Tokyo in June 2017 and arrives in San Francisco 20 years later.

You can read the stories that were submitted to the contest, including the winner:

The contest offered a prize worth $10,000, including 2 round-trip tickets from SF to Tokyo. Read more about it here: “Seat 14C jets into the future” (from Wired).

It’s too late for this contest, but I’ll encourage students to write their own science fiction stories in your portfolio.

I’m glad I found this *after* a recent ANA flight between Tokyo and the West Coast and not before.

Right now, before you continue reading, draw a circle on a piece of paper.

Now, try it again on your phone or computer (click on the screenshot below, but try not to read the headline or article yet; just scroll down a little until you see this):

So, did you draw it clockwise or counter-clockwise? Did you start at the top or the bottom?

Read on: “Different languages: How cultures around the world draw shapes differently” (from Quartz)

I think it’s funny that when I think about how I’m drawing it, I draw it clockwise — maybe because I’ve been in Japan so long? But when I’m not thinking about it, I draw it counter-clockwise — my native-English-speaker self is still stronger subconsciously.

This article from the Guardian introduces a new “boyband” from China called Acrush. 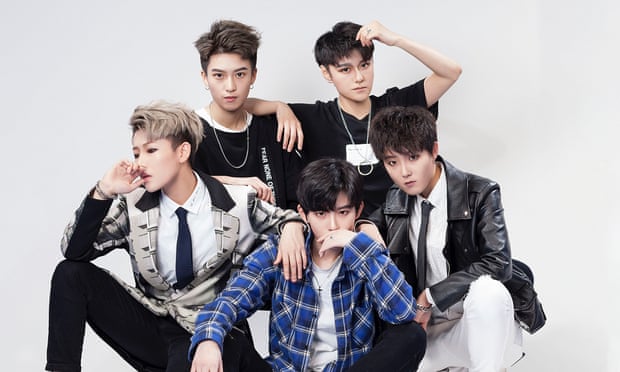 Some excerpts follow. Try paraphrasing these sentences after you read the article, and then write your opinion about the topic. I did the first one as an example:

There is a new “boyband” in China that seems typical on the surface. The band consists of 5 good-looking singers who sing cheerful, danceable songs, and many young women have become fans. But there is one big difference: they’re girls, not boys.

“The A in the band’s name refers to Adonis, a figure in ancient Greek mythology whose name has become synonymous with male beauty.”

“Job advertisements (in China) frequently specify a desired gender, and five feminist activists were detained in 2015 for planning events to raise awareness of sexual harassment to mark International Women’s Day.

“Wang (the manager) said he originally intended to push a “cutesy” girl group. But Acrush has since become the company’s star act after a smattering of concerts led to overwhelmingly positive response, including a flood of love letters from female fans.

“The manager has prohibited members of Acrush from discussing their sexual orientation, and he said there was a sizeable contingent of “anti-fans” who trolled the band over their looks.”

“Feminist issues are getting more and more politically sensitive under the current political regime, but as long as they don’t mention any gender issues and remain entertainment-oriented, it’s all OK.”